You, me, her, that business and even the government all have online personalities. How we act on the web is often a super version of ourselves with less filters. We sometimes act a bit like a toddler and our impression of what is good about ourselves is magnified and projected. Our opinions, especially on subjects we don’t agree with, become clamorous. The web is an enabling environment, because by nature it allows us to act anonymously or without consequence. This gives us the courage to allow our character extremes to run wild. Acts of privilege, abuse and influence can run amok.

There is no single global legal entity that does this job. The ethical standards of online life are decided on by you and I. If we find ourselves acting on behalf of a company or organization over the web, we also set the tone of their online reputation.

We are the contributor, the consumer and also the moderator.

As time goes by, more legislation will come into play, but it is this generation that will set the moral standards of the e-world. I could go into countless examples on this subject, but this is an article and not a book, therefore I will stick to a few points.

The business of things.

E-behaviour is everything we do online. Our e-habits, which in its rawest state is data, have been monitored by tech businesses for many years. These companies know that the better they understand us, the easier it will be for them to sell us something. A lot of this e-habit tracking is done via simple ‘cookies’ on web browsers. There are many other methods including session IDs and caches.

No one enjoys the concept of being watched online and a reasonable person would freak out when they learn how much information is available about them on the web. Not all information is credible. Misinformation almost always results in a negative response, and the ‘WhatsApp policy change’ is a brilliant example of this. The public reaction was thousands of people fled the platform. The irony of the situation is the data involved was always available, it just so happens WhatsApp was now actually asking for permission. It was a progressive step that received a negative response for the business.

We are all part of this force. During lock down many people reported one another or had an opinion to share on those they saw not abiding to regulations. Everyone practices a little bit of online policing and judgment. In most instances we immediately feed our opinion back into the web. It is this type of e-behaviour that fuels false news, misleading, harmful or factually incorrect information.

There is another side to the same coin. We pass judgement about ourselves based on what we consume online. This happens because the messages we receive are often incorrect, or an extreme of the reality spectrum. Our mind develops an unhealthy perception of what is right or wrong, beautiful or ugly, moral or ethical. This phenomenon has had devastating real world effects on our emotional wellbeing, and is perhaps one of the greatest new sources of depression.

If you walk into a classroom and tell every child they are dumb and chubby, then quickly leave before they can engage with you, some of those children will actually go home feeling a little plump and not so smart. The same thing happens online, but at a much greater scale. We have not yet realized that how we behave online actually influences real life.

Not too long ago, Merelize van der Merwe made a social media post that upset thousands of people. Her intent was probably to brag about her Valentine’s Day experience. The post was an image of her holding a giraffe’s heart, an animal she killed as part of a paid hunting activity, which was a gift from her husband.

Perhaps she was hoping for some likes. What happen then is thousands of people objected to Merelizes post, and demanded her Facebook page be taken down. I too was disappointed with her e-behaviour. You can see my response here: https://m.facebook.com/story.php?story_fbid=270465951103106&id=100044191098239

Another example of e-behaviour I would like to share involves Steve Hofmeyr, Conrad Koch and Chester Missing. Steve a few years back tweeted: “Blacks were the architects of Apartheid”. You can read more details here: https://www.timeslive.co.za/tshisa-live/tshisa-live/2014-10-28-blacks-were-the-architects-of-apartheid-hofmeyr/

The summary of the situation is that Chester Missing reacted to Steve’s post, challenging its value and purpose. Steve didn’t like this, and obtained a gag order against Conrad and Chester, accusing them of making defamatory statements. All hell broke out on social media, which overflowed into mainstream news and then a court of law. In the end Steve was not successful in court and the Magistrate said that Steve had exposed himself to criticism, satire and ridicule.

Conrad and Chester had adjusted the ‘online moral compass’ and this is something a Future Thinker does.

The internet is an ever evolving platform and if we do not take responsibility for how we contribute, we become part and party to the harm that might follow. It is a complex situation that needs to also take into consideration the freedom of expression. Until there is a set rulebook for us all to follow, add one extra step to your e-behaviour: before you click ‘post’, ‘like’ or ‘share’, ask yourself: “will this action add value to anyone else other than me”. If you are honest to yourself you will probably make a good decision. You are the architect of the online world, design a safe and ethical place to play, work and learn. 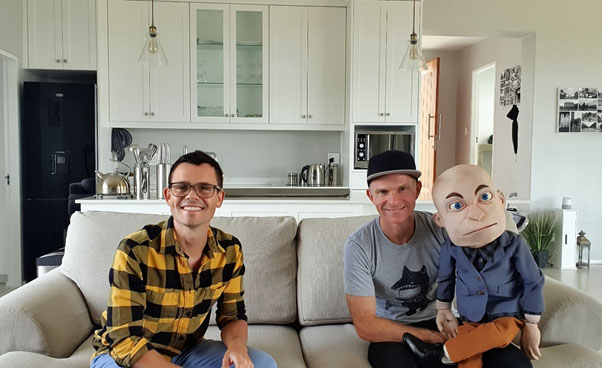