I am sitting in room 113 at Hotel Lagoon Attitude writing this article. I am not able to leave because the resort is in lock down due to Cyclone Emnati. The storm has toggled between category 3 and 4, with wind speeds of between 110 and 170 km/h. Two weeks prior, Mauritius experienced another storm, which was the worst on record in nearly two decades. I am on the island as part of my Climate Change research on developing nations and small island states. I originally planned to go to the island of Grenada. ‘Visiting’ really is important for first-hand experience and authenticity in the articles I write.

Mauritius, the land, is probably around 8-10 million years old, formed from volcanic eruptions. There are around 2000 islands scattered around the planet. Madagascar, which is very near to Mauritius, is believed to be the oldest, dated around 70 million years. The newest addition on the planet is the small island of Surtsey, not even 100 years old yet.

Sitting in the middle of nowhere in the Indian Ocean, Mauritius was for a very long time uninhabited. There is debate, but it appears Arab seafarers from around the 10th century first walked ‘its’ sandy beaches, but the real records started when the Dutch begun their operations in 1598. Later, the French claimed it for themselves, proceeded by the British. Today there are about 1.3 million citizens. As with many nations involving European explorers, the islands history includes slavery and indentured labour. Many of ‘them’ worked on the sugar plantations, such plantations helped the island become economically successful. The Dutch were responsible for the first ‘sugar farms’. While exploring the island I could see huge sections of land, looking like fluffy green carpets stretching for kilometres, some wrapping themselves around hills and up mountain sides. Over half of the country’s land is arable, and out of that space almost all is sugarcane.

Mauritius gained its independence on the 12th of March in 1968, but its true transition to a ‘republic’ only happened in 1991 when the legislature voted the nation to be totally ‘removed’ from England’s control. In 1992, Mauritius became a republic with a President as head of state. In 2015 the National Assembly elected their first female president, Ameenah Gurib-Fakim. Unfortunately she was accused of financial misconduct three years later and resigned.

Today, there are three main political parties. I like the provisions made in the country’s National Assembly for minority representation. Two thirds of the population are of Indo-Pakistani origin and most of those are descendants from indentured labourers. While English is their official language Creole is what you will hear most people speaking, which is a mixture of French with an African island flavour, for lack of finding a better way to describe it. There are about four primary ‘cultures’ making up the social fabric of Mauritians: Indian, African, European and Chinese, and because of the diversity and religious practices, the island has a lot of holidays. I saw places of worships for Hinduism, Christians and also Mosques.

The population density on the island is the highest in the region, but only because of the small land size. Back in the late 1950s, when falciparum malaria was finally under control, there was a sharp baby boom. Today, their population growth has stabilized. About 60% of people live in rural areas, and the balance in the main city (Port Louis) others in the four towns around the island. Most of their population are under the age of 35. The country offers free basic health services as well as education to the entire population. More than four-fifths are literate and most can speak three if not four languages.

There are two major rivers: Grand River and the Black River. They are responsible for the primary sources of hydroelectric power. A large percentage of electricity is generated by a few sugar companies who run their own thermal power stations. Other energy is derived from wind, landfill gas, cane trash, fuelwood and solar. Independent power producers play a large part, many of whom have private generators from the sugarcane industry. They use bagasse and imported coal.

Mauritius has very few viable mineral resources: basalt and lime are mined. I did drive past a salt ‘harvesting’ field while on my way to climb Le Morne in the South of the Island. There are five mountain ranges, and the island is almost entirely surrounded by coral reefs. It really is beautiful.

Mauritius was once home to the Dodo. Today, depending on the article or book you read, there are about 650 species of flora (311 endemic) and nearly 1000 types of animals (300 endemic). The island houses one of the world’s most endangered raptors called the Mauritius Kestrel.

Unemployment is around 9.5%. The island has a mixed developing economy based on manufactured exports, tourism, agriculture, and financial services. I found it interesting that they import more wood products than export. The country is working on ‘reversing’ deforestation. Forests make up one fifth of the island. I saw BMW, Woolies, Mac D, some large shopping malls, factories and excellent roads. Electricity stays on, even during a cyclone. Apparently the country is receiving some technical assistance from Japan and India to regenerate their fishing sector, which is suspicious considering Japans reputation with overfishing. Mauritius’s seas contain many species of fish which other nations might like, tuna, snapper, and grouper. Aquaculture is done with channel bass and sea bream. Port Louis is a ‘free port’ to encourage the country to be used as an international shipping hub. The island has no major rail service, but there is a project underway.

The nation has enjoyed significant tourism since the 1970s. It feels safe here. I drove through ‘Cybercity’ in the suburb of Ebene. In 2001 the government created the Information and Communication Technologies Authority to promote technology. The telecommunications sector is well developed. Three-fourths of the population have cellphone services and one-fourth have internet. Art, creative writing and dance are popular.

Mauritius only has a small paramilitary force that includes a coast guard. The country has been influenced by global wars, Suez Canal, the price of Sugar and even Piracy. In spite of this, I believe it’s a stable nation and doing better than most in Africa. (Although my cab driver had some negative opinions about the amount of taxes charged and how it was spent. But that’s a universal complaint is it not?)

How will this island stand against Climate Change?

2020 was the hottest year on record. It is likely that the 1.5 degree threshold (Paris Agreement) will be reached as early as 2024 and our planet is on route for a 3 degrees increase. The ramifications of this will be unprecedented and dreadful. I cannot explain it any other way.

Mauritius is especially exposed to natural hazards due to its location in an active tropical cyclone basin, a fact I learnt the hard way. The US National Academy of Sciences has underlined that the chances of a major tropical cyclone occurring in the southern Indian Ocean basin will increase by 18% every decade.

Everyone on the island needs to, and probably many are already, worrying about water, food, coastal protection, sanitation, sewerage infrastructure and drainage systems. Sea level is rising at about 5.6 millimetres per year. That might not sound like a lot, but it takes Mother Nature thousands of years to make such a change, and humans are causing this in a handful of years. In some places erosion has reduced the width of beaches between 10-20 metres in the last decade alone. The ‘Mauritius Sector Strategy Plan’ on Tourism reports that over the next 50 years or so, half of the beaches will no longer be able to receive visitors and tourists. That is a devastating concern, because without the beaches, there will be no tourists.

Extreme weather events like heavy rains, crazy storms and flash floods are very likely to become frequent and intense. There is also the major concern related to the projected reduction in rainfall and the anticipated increase in evapotranspiration (the sum of evaporation from the land surface plus transpiration from plants), which can result in agricultural production declining between 15 - 25 % by 2050. What will happen to the people on this island if they can’t farm or attract tourists?

The Mauritian government has highlighted these primary concerns. Let me go as far to say ‘fears’, because that really is a more apt choice of word.

Mauritius is spending about two percent of its actual GDP on environment and climate change related policies alone. No less than 6-8% of the GDP (my estimate) is indirectly channelled to supporting projects. In 2018 their government revamped the National Environment Fund by providing around 2 billion (Rupees) to support measures to mitigate flooding and water accumulation, rehabilitation of degraded coastal zones and solid waste management. Maintaining and upgrading general infrastructure is all part of the process, for example, ‘they’ are Building a light-rail transportation system (the first of its kind on the island) and one of Mauritius’s projects to curb CO2 emissions. I believe one of the train stations is already open. Many coastal rejuvenation projects are underway.

I read a report (by an official) that said this: “Since the adoption of the Paris Agreement in 2015, we have mobilised considerable resources at the domestic level. We have spent some 6 billion (Rupees) in support of our climate agenda in the past five years.”

In August of 2019 the ‘Capacity for Disaster Reduction Initiative’ was started which includes a team of eleven experts to support a multisectoral approach to the archipelago’s (a group of islands closely scattered in a body of water) efforts to withstand climate change and the related disaster impacts. ‘They’ also established an ‘environmental police’ unit as first responder when a disaster occurs.

The sad fact of the matter is that island and developing states are in general the least responsible for Global Warming, yet they are most vulnerable. I don’t see Mauritius encouraging fossil fuel exploration or coal solutions because it’s easier and more profitable for them, which is not something I can say about my own country.

What needs to be done to support SIDS?

First of all, we need to all appreciate that we are all responsible for this situation, both directly and indirectly. There are things we can do at home to help by being ethical consumers. Then we need to ensure we have ethical and sustainable businesses. I write about ‘how’ to achieve and become these a lot, and you will find these articles on my website. I was extremely happy to be able to meet with Lagoon Attitudes Marketing and General Manager, and very grateful for their time offered to show me around their estate and share the many ideas they have already initiated. They really are working hard at being an ‘eco-committed hotel’ and setting an excellent example. Thanks to Thompsons Travel South Africa for helping to set up that interview. You can see the interview on my Videos page.

Finally we need to put pressure on Governments and make climate change a priority. SIDS need finance and technical support. Advanced nations must honour their pledges and scale up emission reductions to achieve net-zero GHG emissions by 2050, but sooner is better! 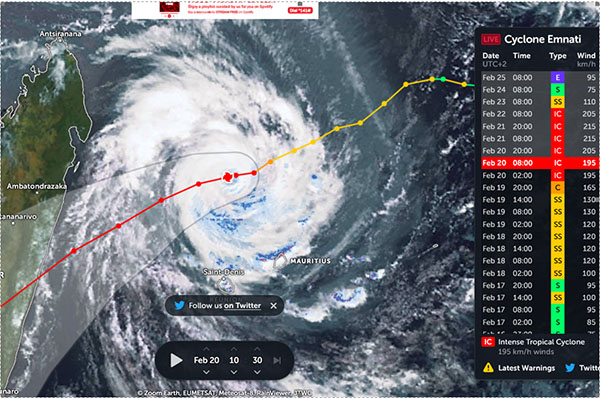 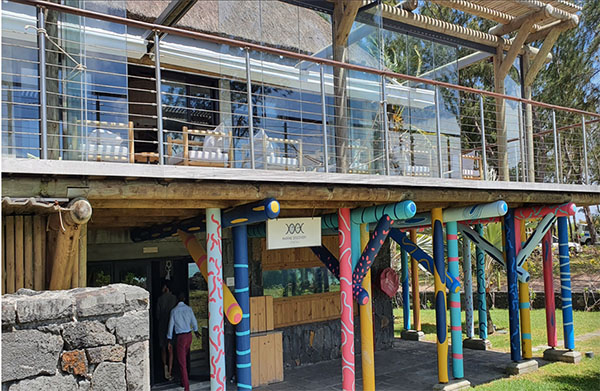 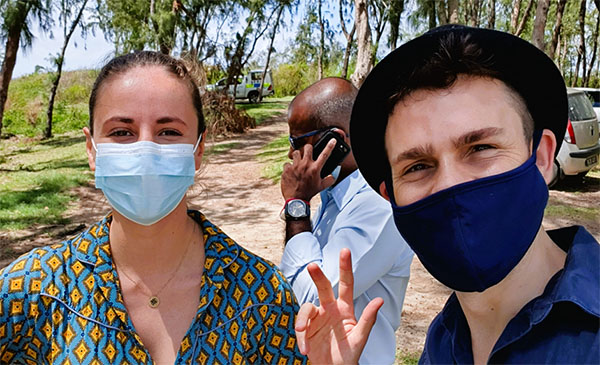 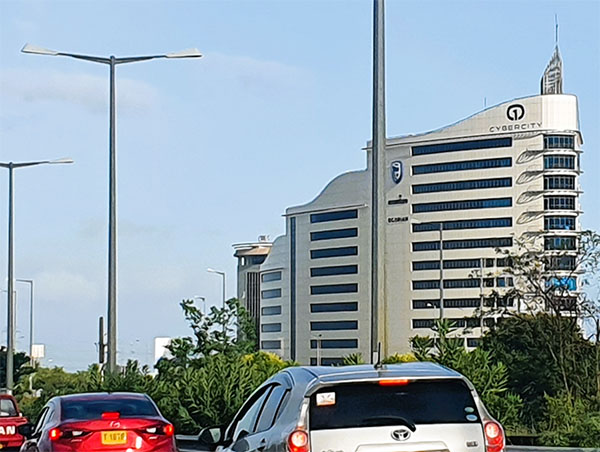 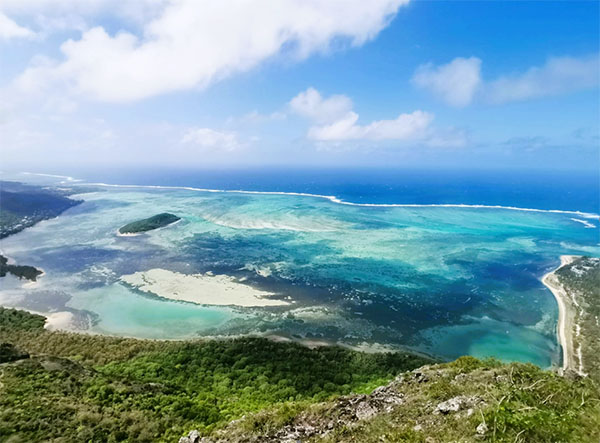 The view from the top of Le Morne.