Shell and Impact Africa Limited are proceeding with a seismic survey off the Wild Coast, starting on the 1st of December 2021, looking for fossil fuels.

Did you know that some people have pointed guns at, slashed tyres and even run the Google's self-driving cars (named Waymo) off the road! What is wrong with humans!

"Face Pay" is the name given to tech that identifies who you are, and then bills your account for a service or product. An example of this can be found in Moscows supermarkets and more recently their metro system.

How do you feel about being so closely watched when entering a store? It’s coming!

Finance minister Enoch Godongwana has announced that South Africa will officially launch its new e-visa system in 2022. There is plenty of talk about innovation from the South African government. If just a few of these projects materialize, it will help our country immensely.

At Glasgow University, holograms which can offer a sense of touch are being developed. They will use ‘jets of air’ as one of the methods to deliver the sensation.

I think this idea was stolen from Ghosts?

More a point of record, Facebook renamed its holding company to Meta. This relates to the Metaverse, a subject I research and write about often. Expect more news on this.

The preferred bidders for renewable power generation capacity in South Africa were recently announced. About 50 billion Rand is expected to be spent. We should see the fruits of this effort around April 2024. (Nice and fast, much quicker than fossil fuel plants!)

There is an increase in female elephants in Mozambique's Gorongosa National Park area being born without tusks. But why?

Some experts say it’s an evolutionary responds for the species to protect itself against poaching. How awsum would that be! Could nature be paying so much attention?

Gosh… what has nature got planned for the rest of us?

Well done to https://jumo.world/ , a South African and London based fintech business who have raised $120 million! They use Al & Machine Learning to build accurate credit scores and targeted financial products for people who don’t have a formal financial identity or credit record. Very exciting.

There is not nearly enough funding for start-up tech businesses, so news of Grindstone supporting with R100 million makes me smile a lot. Thank you!

I hope to hear about more of these sorts of projects in the near future. 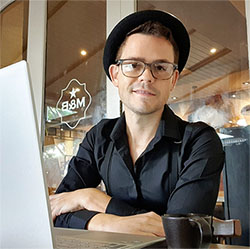