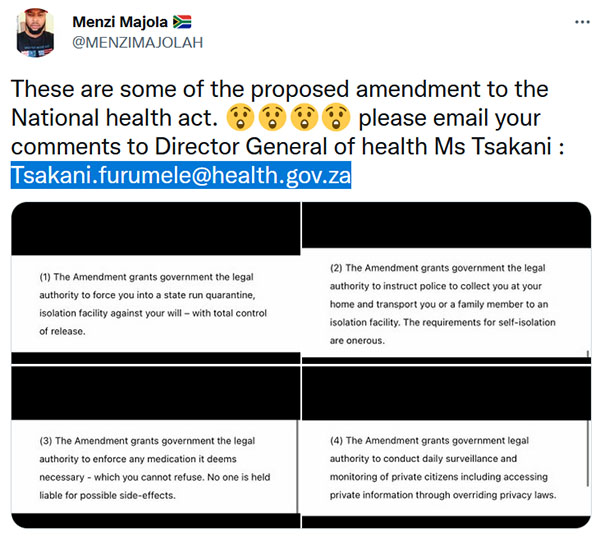 Letter sent by Jean-Pierre Murray-Kline to Ms Tsakani of the Department of Health regarding the proposed changes to the regulations under the National Health Act. Sent on the 6th of April 2022 to ‘Tsakani.furumele@health.gov.za’

I believe unique legislation is needed to deal with natural and man-made disasters.

I do not believe the power should be allocated to the State, but rather a majority Parliament ‘decision’ and unique oversight body established by Parliament in each instance. Even then, ‘its’ powers must be limited, and Parliament and the ‘oversight body’ remain accountable to the Constitutional Court in the State of Emergency or Disaster.

In addition, the Constitutional Court must also establish its very own ‘oversight body’ with powers to expedite charges against abuse by Members of the State and Parliament.

We could have been better prepared, but we were in a weakened position economically, socially and morally. We were (are) a divided, bankrupt and State Dependent people. We are far too forgiving of Government and too well versed in letting ‘things slide’.

We enabled human rights violations and restrictions to freedom and liberties.

To maintain (or offer more) the ‘permissions’ the Government of South Africa has acted upon during Covid 19 would be a devastating mistake.

Therefore, I object to the current draft of the new (and old) regulations under the National Health Act.

It should be opposed with vigour for all our sakes.