The Status of the Entertainment Industry and its Future. (April 2021) 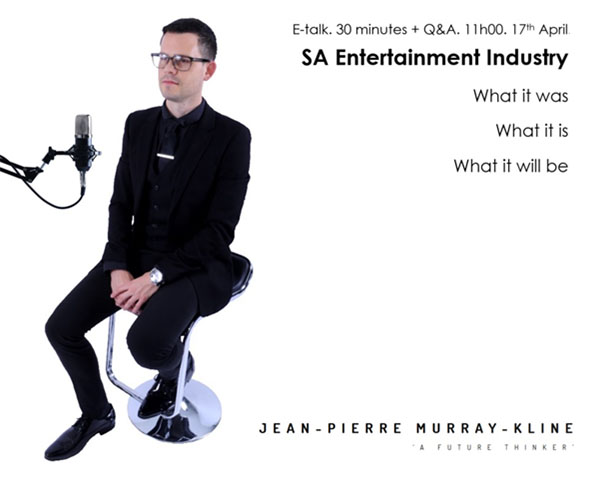 The Status of the Entertainment Industry and its Future.

As a business and environmental technologist I spend a substantial amount of time learning about social economic factors. This, added with the fact that I am an entrepreneur who has managed several online businesses and also consulted in many other sectors, enables me to offer excellent insight on the status of just about any sector.

The business of entertainment is the love child of the Event and Hospitality sectors. Both very diverse in their own respect. Collectively they cover: conferences, exhibitions, trade shows, corporate events, seminars, promotions, fundraising, tours, hospitality, entertainment, content production, art, performances, campaigns, demonstrations, education, technical services, agencies and brokers, transport, ticketing and so much more. It is a huge sector, run differently in every country.

‘Entertainment’ itself has a few cousins, namely sports, gaming and film / television and radio. These are all very large sectors in their own rights.

‘Event Sector Entertainers’ or ESE for short, includes entertainers, musicians, Djs, bands, professional speakers, poets, magicians, buskers, dancers, comedians, or anyone who is prepared to stand in front of someone else, derive enjoyment for them by performing, and then charge for the time. This article is only about ESE. It was prepared for a targeted audience in a keynote talk. Therefore, the extended family in the business of entertainment and hospitality are excluded.

The ESE makes up a very small fraction of ‘full market revenue’ which for those of you who don’t know is substantial. For example the estimated worth in 2020 in the USA alone was over 700 billion USD. There is no confirmed value for the ESE sector only, which makes sense because the lines between businesses and suppliers are blurred. For example: a hotel (hospitality sector) can be both a ‘client’ and a ‘supplier ’of the ESE. A hotel can host an event and need the ESE, or the ESE can use the venue as a supplier. The one bit of information I did find concluded an estimate worth of primary businesses in the ESE sector is between 1.5 and 2 billion USD annually.

I often use the USA in examples, and the reason for this is that they are excellent record keepers. Their market is very different to our own. They have a population 6 times greater and their GDP (around 21 Trillian USD) is sixty times larger than South Africa’s, around 350 billion USD.

Whenever I am in a situation and there is no reliable data I often take the USA average, and give an estimate for South Africa at 1/ 60th of the value, context derived by GDP comparison. This is a crude way to generate an estimate, but has proven some rather accurate estimates, confirmed later on when data did become available. Using this theory, an estimate worth for the ESE in South Africa, extrapolating from the USA data of 125000 USD, works out to around R1.8 billion annually. I have a great deal of experience in the ESE sector. Have you ever met a Mime or Dancer that has issued a tax receipt? I ask because I need to say: it is safe to assume there is more money transferred than reflected on paper. The estimate I have given is a number I am confident of and you can be too.

Despite the lack of interest in paperwork, the ESE sector does have many skilled workers. In the USA around 2.5 million jobs are credited to the sector. In South Africa my estimation would be 40000 professionals. This is lower than my normal average to compensate to the fact we have a less developed economy. It is also a small fraction compared to the hospitality industry which in one report I found said it employed over 700000 people in South Africa in 2019.

The ESE in every respect is a boutique sector. It is also the one that receives more requests to donate its skills for ‘good causes’ by government and corporates than any other. I find it interesting that all these entities ‘forgot’ about the ESE during Covid.

While the ESE is a small sector, every single ‘gig’ uses no less than three suppliers, often many more. For example: transport, a PA system and an agent. It stands to reason then that at least 120 000 professionals are supported by the ESE. The sector predominantly trades at high value short burst services, so even a few gigs per month contribute positively to a healthy economy.

South Africa has in large over the last 20 years been enjoyed as an events destination. We had quality infrastructure and competitive pricing. This is also the reason the Film sector did well. Not too long ago, we were ranked number one in Africa by the International Congress and Convention Association. Unfortunately, many issues have hurt our reputation, such as electricity shortages and crime. Mauritius has overtaken us in the World Economic Forum's Travel and Tourism Competitiveness Report. This is testament on how a small island can compete economically on a global scale.

The ESE has always depended on one thing: people believe that there's nothing quite like a face-to-face experience. It plays a pivotal role in delivering the complete magical experience for a memorable and authentic South African occasion.

Covid and the subsequent government regulations saw a change in the events and hospitality sector no one was prepared for. We should have been, but that is a subject for another article. There are 7 sectors which can be shortlisted for those that suffered the most by world-wide lock downs and regulations:

Income from the ESE sector is derived from corporates, sponsors (promotions, endorsements) and then government projects. All income channels have been severed and not expected to be returned to ‘normal’ for the next 12 to 24 months.

It is easy to find many articles and online testimonials from people in the ESE sector. The damage has been extreme. Technical crews lost all their income. Event venues and theatres shut. Amusement parks closed. Cruise ships cancelled. Entertainers sold assets and took loans. People could not pay rent, feed their children or pay for their cars. Many had to find alternative trades, some literally started to sell gherkins online.

The Events Industry Council (in the USA) estimates that during the pandemic, the entertainment sector shrunk by 23%. I believe in South Africa the ESE market shrunk by between 75% and 90%. Several articles I have read give similar estimate ranges.

A survey conducted by PCMA (www.pcma.org) on business events professionals showed that 87% of participants confirmed their clients fully cancelled the original event dates, and out of that only 66% would consider a postponement. The challenge with a later date, other than the loss of income for the original date, is that clients and guests have the perception that an event is now a health and financial risk.

Online options really are the only consideration. 7 out of 10 businesses that intend to host an event, will move to a virtual option. Reed Exhibitions (a market leader) COVID-19 Barometer said: 84% of visitors and exhibitors have tried at least one new digital service. 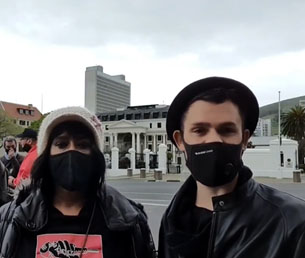 Image: Jean-Pierre Murray-Kline and Vicky Sampson in display of public support for the ESE sector outside parliament during lock down:

As the weeks continued…

Entertainers watched while many sectors received funding relief and media attention. The Department of Arts and Culture put forward a trivial relief project, and the process failed to take into consideration that ESE is primarily an informal sector. The majority that did apply were rejected because of paperwork. The grants that were available were limited to confirmed bookings only and did not cater for the months that would follow with no income. In a research article: only 7% reported successful applications for the various small to medium enterprise support mechanisms and only 21% for the Department of Sport, Arts and Culture relief funding.

A global comparison: during the early months of the pandemic the German government announced a €550 billion package which would in part be used to support the music and creative industry. That works out to around 9 Trillian Rand. Not even 0.01 % equivalent of that was available for the ESE.

Most South African entertainers today feel they are non-essential, after all, they were declared as such by Government. Entertainers felt forsaken. Many in the Events and Hospitality sector tried very hard to get their voices heard. I personally went to stand outside parliament with Vicky Sampson for one campaign, amongst other initiatives I took part in. The project #LightSAred was one of the most visible, buildings all around South Africa were lit up red to try and get attention.

On the other side of the same coin, a small handful of entertainers were innovative and really impressed me. Larry Soffer stood out for a number of reasons. World-wide, competitive gaming and rap music did very well. For example: the developers behind online multiplayer phenomenon Fortnite moved their concert into the framework of their game’s virtual universe. It involved rapper Travis Scott and the performance reached a staggering 12 million people.

A question on the mind of those in the ESE is: ‘will we be appreciated in the future more than we were in the past?’ This would be a reasonable question considering the World has been deprived for so long of entertainers. Will there be a huge uptake once the sector opens? Can we recover fast? Will the entertainers of the years gone by that have not evolved become relics in a new world?

What it will be?

The ESE will recover but will become something new.

It will be stronger if we use the lessons from this pandemic, and understand that there was a complete lack of preparation and absolutely no foundation to fall back on. Entertainers in the future must run their performance skills like a business. Entertainers need to mean business. Here are some considerations for the future. 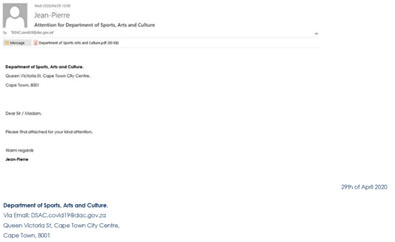 Image: Jean-Pierre writes to government related to the ESE sector.

Entertainers will continue to struggle. I predict a 25-35% general recovery of the market once the majority (50% or more) of people are vaccinated and / or the State of Disaster is removed fully. At the time I wrote this article, I predict this will happen around October 2021.

People in the ESE sector should prepare for sales to recover to 50-75% of average sales by late 2022 or within 2023. A lot will depend on the state of our economy, driven by many factors. Some red flags and very big influences are:

A few notes on global influences: